"One of the most interesting, engaging and educational talks I've been to."
"This was literally one of the BEST sessions I've EVER attended in my CAREER (and there's been a few).

The structure of the session was superbly crafted for the audience (well me at least).
I also found this EXTREMELY valuable as it's not a
subject I've had enough exposure too.

I'm hopeful I can be a strong Ally as always try and be inclusive and considerate towards the people I work with and feel this has helped me already."
"I think [Trans Awareness in Games]  should be a must for EVERYONE. The value and new (all be it light) understanding I now have has opened my eyes to a world of quite frankly shocking stats and behaviours that nobody should have to face."
"I felt like the event was particularly educational whilst being created in an entertaining, frank and engaging way." 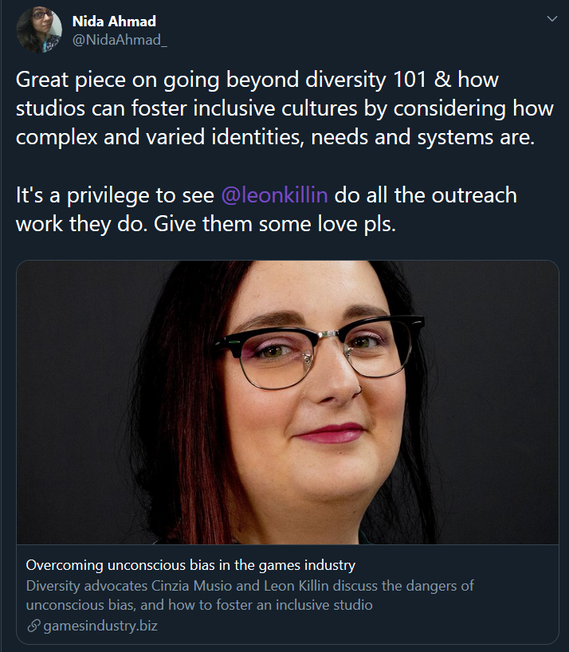 Tweet by Nida Ahmad (@NidaAhmad_) with a link to the article Overcoming unconsious bias in the games industry. Nida's tweet reads "Great piece on going beyond diversity 101 & how studios can foster inclusive cultures by considering how complex and varied identities, needs and systems are. It's a privilege to see @leonkillin do all the outreach work they do. Give them some love pls." 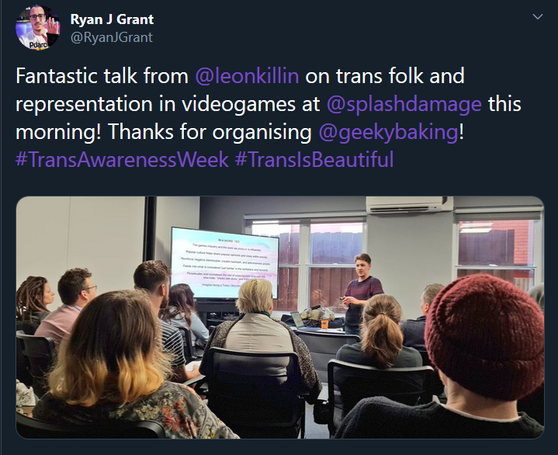 Tweet by Ryan J Grant (@RyanJGrant) containing a photo of Leon and session participants at Splash Damage. The tweet reads "Fantastic talk from @leonkillin on trans folk and representation in videogames at @splashdamage this morning! Thanks for organising @geekybaking ! #TransAwarenessWeek #TransIsBeautiful"

Tweet by Anna Latchman (@AnnaLatchman) that says "I read [the GBiz article Overcoming unconscious bias in the games industry) yesterday it was so good! I struggle so hard to put into words the subtle issues the industry has but reading this has really equipped me with the language to explain unconscious bias to others" 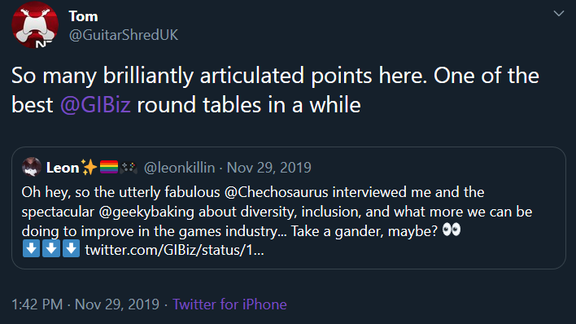 Tweet by Tom (@GuitarShredUK) quote-tweeting Leon's link to the GIBIZ article Overcoming unconscious bias in the games industry. Tom's tweet states "So many brilliantly articulated points here. One of the best @GIBiz round tables in a while"
Site powered by Weebly. Managed by SiteGround